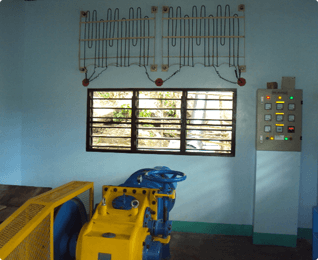 For the first time, the residents of Sitio Timodos are seeing light bulbs shining brightly within their community. In November 2015, the 23-kilowatts micro-hydropower system was finally completed, tested, and became operational.

Sitio Timodos is located in Barangay Manobisa, Magpet Municipality, North Cotabato. The 87 households (project beneficiaries) belonging to the Manobo tribe now have access to renewable energy for household and community lighting. The micro-hydropower system is also designed to energize post-harvest facilities (like corn mill, hammer mill, coffee huller, and abaca stripping machines) that could eventually boost agricultural production and family incomes. It can also be used for battery charging and other income generating activities that are driven by electricity. It would also provide electricity to the existing elementary school. Furthermore, it will wean the community away from their dependence on kerosene-fed lamps for lighting.

Some project beneficiaries could not hold off their tears as they stared, as if in shock and disbelief, at the bright light bulbs. Their initial response was understandable. Never before has the community experienced something like this. Having access to electricity right within their midst was simply amazing. Many Manobo generations came and went over hundreds of years in this off-grid, marginalized and neglected indigenous community. But no one could have imagined that one day their sleepy, remote and lonely village would become home to an alternative micro grid that would provide electricity to present and, hopefully, future generations.

In between sobs, Janet – one of the project beneficiaries– said that “We have lived in utter destitution, for as far as I can remember, totally forgotten, totally resigned to the idea that our lives will never get better. Now we know that there are still people who care about us, who are willing to share their knowledge with us so that we would learn to stand on our own and be proud of being called Manobos.”
The micro-hydropower project was implemented with the full participation of the Manobo community (from pre-construction, construction up to the operation and maintenance stages). The Manobisa Barangay Council, Magpet Municipal Local Government Unit, and the CADC (Certificate of Ancestral Domain Claim) Holders, also shared their counterparts in cash or in kind. The project would not have been realized without their active participation and support. More importantly, the project would not have seen the light of day without the benevolence of Misereor-KZE of Germany which provided the funds needed for the project .
It is most heartening to note the contribution of the community members themselves who – together with Yamog, the Barangay Council, Municipal Local Government Unit of Magpet, and the Tribal Council – worked hard and sacrificed so much despite the many challenges encountered during the gruelling 16 months of doing the civil works and electro-mechanical installations. All 87 household-beneficiaries have successfully organized themselves into one energy-users association called Timodos Tribal Micro-HydroPower Association (TTriMPA). They have accepted the responsibility of taking care of the sustainable operation and maintenance of the MHP system, including the protection of the Timodos watershed which is crucial to the sustainability of the MHP system and the entire community.

The MHP also serves as a vehicle for energy users to appreciate better the value of their watershed, thus motivating them to work more towards its conservation. They know that, without water, there would be no electricity and no social and economic opportunities.

The Mabato River which traverses Sitio Timodos, is the body of water identified by Yamog when it conducted the technical study and designed the MHP system. The selection of this renewable energy source was primarily a decision taken by the residents of Timodos in keeping with the participatory development approach of Yamog.

TTriMPA has already formulated a Sustainable Watershed Management and Protection Plan for the 700-hectare watershed of Timodos, which is located at 1,200 meters above sea level. Done in a participatory manner and using a multi-stakeholders approach, the plan is intended not only to complement the MHP system, but also to eventually sustain the ecological balance of the entire community. The Timodos watershed is home to diverse, valuable flora and fauna including the Philippine Eagle.
With trainings conducted by Yamog to build their confidence and improve their capacities, especially in relation to the long-term management of the MHP system, the inhabitants of Timodos are not anymore looking forward to the future with a sense of resignation, but with positive energy full of hope and enthusiasm. The indigenous people of Sitio Timodos have shown that it is possible to break out from the vicious cycle of helplessness, hopelessness and indifference for as long as they believe in their incipient collective power to change their lives for the better.