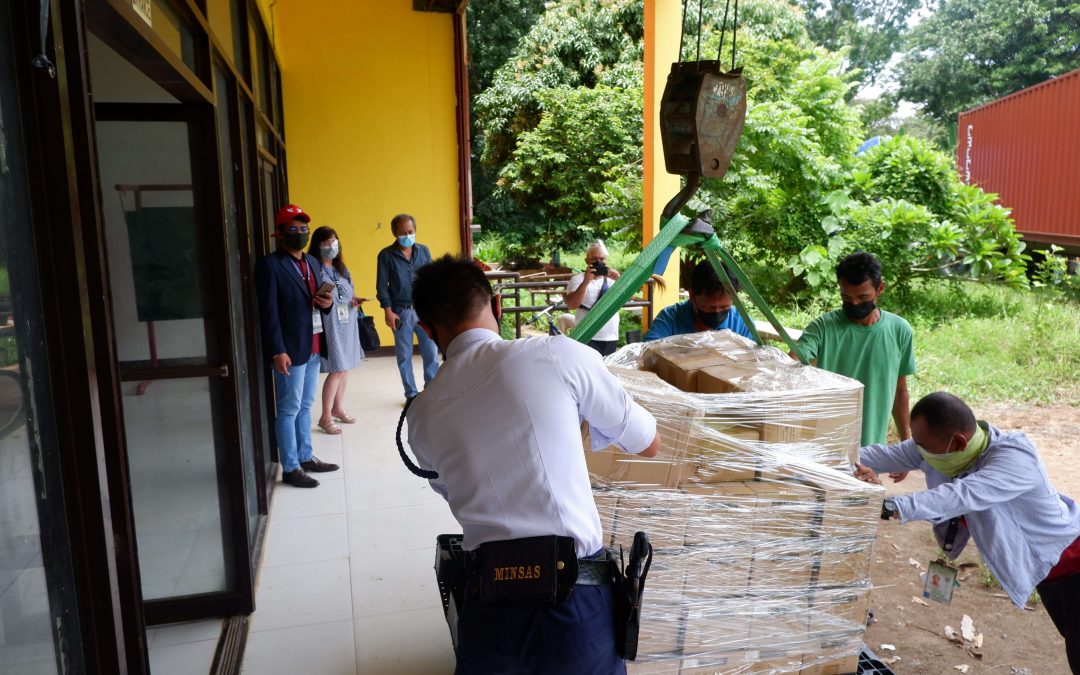 On August 16, 2021, Yamog Renewable Energy Development Group, Inc. welcomed the arrival of 2,938 units of solar home lighting system (SHLS), worth PHP 68 million, in off-grid communities in Mindanao. This is part of Yamog’s ongoing project “Improving the Lives of People in Off-Grid Communities in Mindanao Through the Provision of Sustainable Energy” which is funded by the European Union-Access to Sustainable Energy Programme (EU-ASEP). 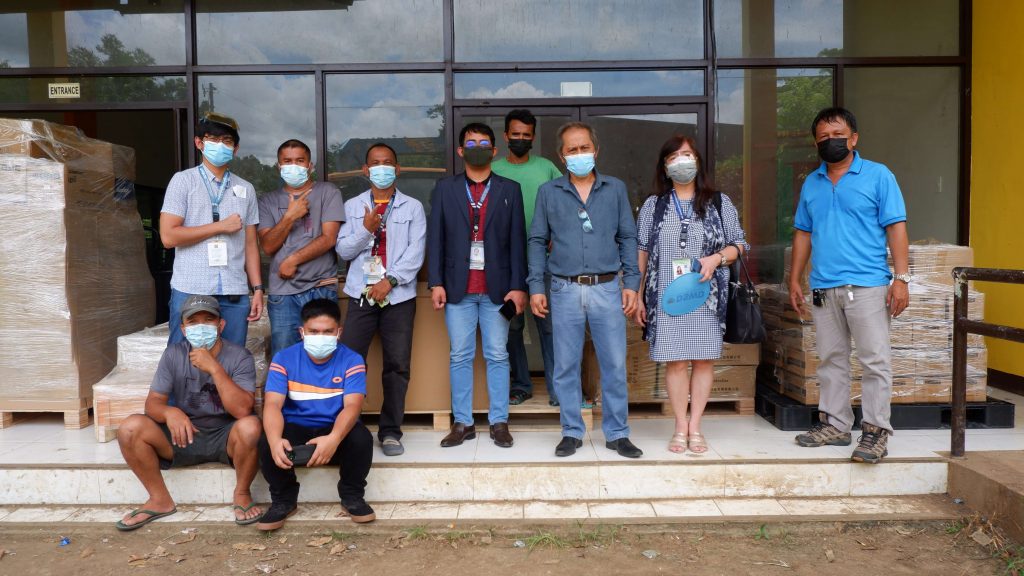 The installation of the solar energy devices will commence in August 2021, to be completed by the end of October of the same year. The supplier will conduct a week-long Orientation and Technical Training on Basic Installation, Operation, and Maintenance of the solar home lighting units to be participated in by representatives of the Electric Cooperatives, Yamog, and the organized Energy Users Associations prior to deployment of the units to the household beneficiaries. 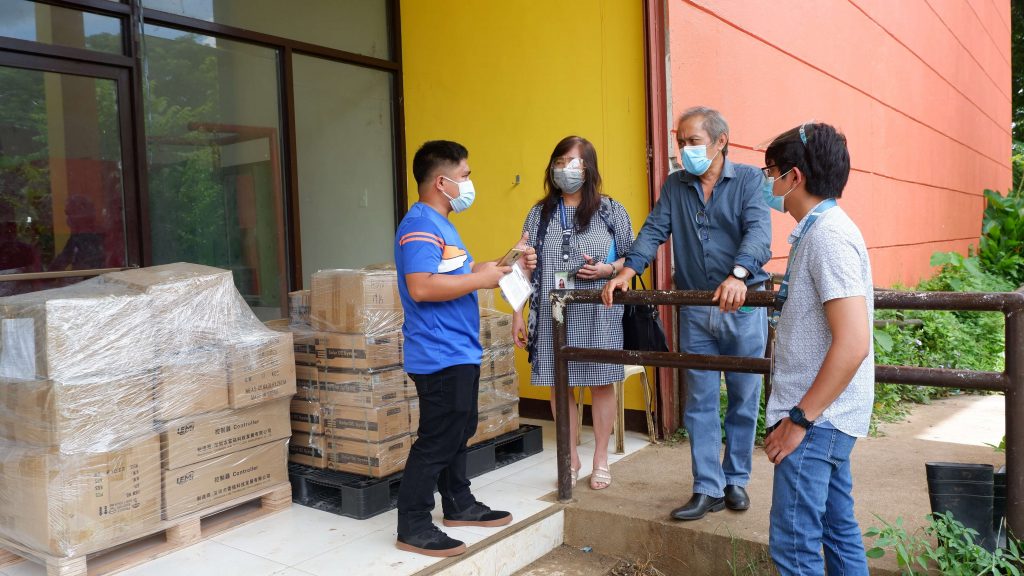 Managing Director Porferio Jabla Jr. is briefed on the progress of the delivery of the SHLS units.

The total selected 2,938 poverty-stricken household beneficiaries are situated in 53 far-flung, isolated sitios in the municipalities of Kapalong and Talaingod (Davao del Norte), Pantukan (Davao de Oro), Arakan (North Cotabato), and Don Marcelino (Davao Occidental). The project is also made possible through the strong support and counterpart funding of the Katholische Zentralstelle für Entwicklungshilfe e.V (KZE)/Misereor in Germany and partner municipal and provincial local government units in the aforementioned areas. To date, Yamog has completed the social preparation phase and the conduct of various capability-building activities culminating in the formation of Energy Users Associations (EUAs) to ensure project sustainability.

This solar energy component of Yamog’s project is harmonized with the solar photo-voltaic mainstreaming strategy of the Department of Energy (DOE) in line with the Government’s aim of achieving 100% rural electrification by 2022. Moreover, it is also designed to complement the efforts of partner electric cooperatives, namely: Northern Davao Electric Cooperative (NORDECO), Cotabato Electric Cooperative (COTELCO), and Davao del Sur Electric Cooperative (DASURECO) in their bid to reach out to unenergized households in distant communities and to increase the utilization of renewable energy as part of their energy mix. 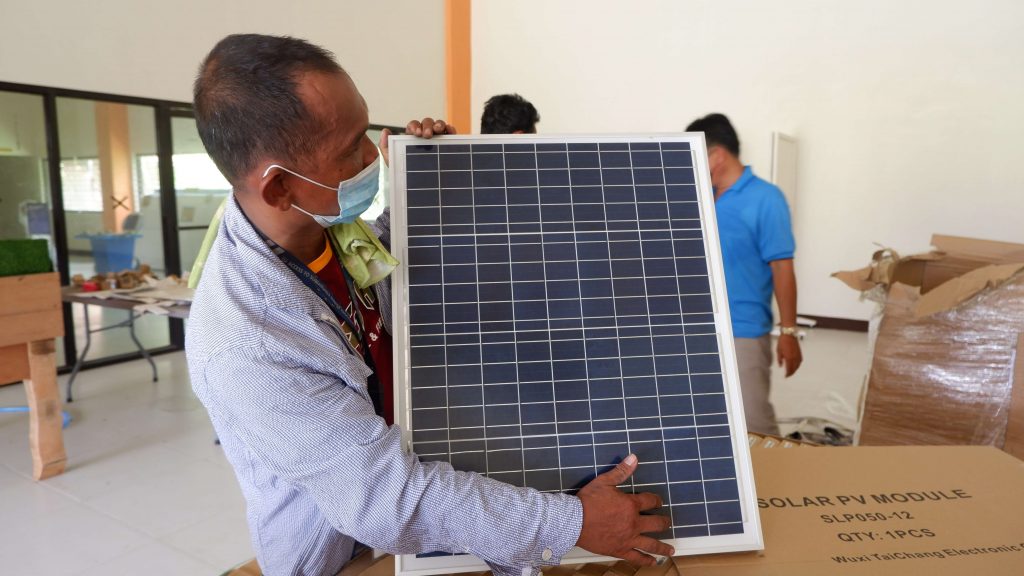 Yamog’s solar energy development thrust under the EU-Access to Sustainable Energy Programme is in keeping with the Philippine Government’s commitment to the UN Sustainable Development Goals which include the promotion of the use of renewable energy against the backdrop of worsening problems like global warming, climate change, and mass poverty.